About Koerner | Koerner’s Youth | Emigration | Travel in U.S. | Politics and Lincoln | Civil War | Spain | Publications By or About | Family

View digital images of documents, letters, and telegrams of Koerner and Abraham Lincoln at the following links.

We Must Make Them Understand Lincoln is Our Man 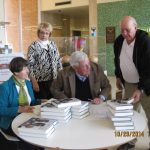 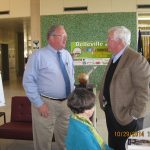 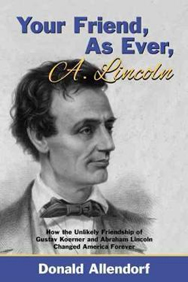 Unless otherwise stated, all photograph images on this Web page were used with permission of

Snyder was admitted to the bar in 1820 and practiced at Cahokia before moving to Belleville in 1833. He took Gustave Koerner as a law partner and introduced Koerner to Democrat politics. Snyder served a term in Congress and was the Democrat candidate for Illinois Governor at the time of his death in 1842. Snyder’s fashionable home at North First and West “A” was demolished in 1917 to make room for a new post office.

In 1833, Gustave Koerner had a German law degree, but unfamiliar with American law and the English language, he decided to take law courses at Transylvania University in Louisville, Kentucky. He met Mary Todd while mixing in the Louisville social scene, a friendship that would be renewed in later years when Mary married Abraham Lincoln.

Koerner’s early legal career required riding the courthouse circuit to earn a living. Koerner described his winter visits to the Kaskaskia courthouse: “a mere barn, with some window panes missing. Judge Breese would sit on the bench in his great coat with a handkerchief tied around his head.” Due to a lack of accommodations at each stop on the circuit, Koerner said he shared a bed with the judge and prosecuting attorney and they slept “spoon like.” Sidney Breese would later serve in the U S Senate and work to establish railroads in Illinois.

Shields and Koernesr partnered in the legal business in Belleville before Shields was named to the Illinois Supreme Court. Koerner succeeded Shields on the high court. While serving as State Auditor Shields challenged Abraham Lincoln to a duel over remarks critical of Shields printed in a Springfield newspaper. The two met on an island in the Mississippi river near Alton but friends persuaded Shields to drop the challenge. Shields was named U S Senator, defeating incumbent Sidney Breese. Shields was wounded in the Mexican War and a pro-Breese cynic noted how the injury improved Shields’ candidacy as a war hero. “What a wonderful shot that was. The bullet went clean thru Shields without hurting him, or even leaving a scar, and killed Breese a thousand miles away.”

Shields was appointed a Union general in the Civil War by Lincoln and has the distinction of being the only person to serve three states as U. S. Senator, representing Illinois, Missouri and Minnesota

Trumbull practiced law in Belleville with his brother. Koerner and Trumbull attacked the last vestige of slavery in Illinois, the indentured servant act, by taking the case of Sarah Borders who fled her Sparta, Illinois owner to move to Peoria. The Illinois Supreme Court ruled against her, but Trumbull resolved the issue a few years later in a St. Clair County case, Jarrot versus Jarrot.

In 1855 Lincoln tried to succeed James Shields as Senator and came within five (5) votes of winning the legislature’s endorsement. Lincoln could not make up the difference on later ballots and threw his support to Trumbull who was running a distant third up until that moment. Trumbull introduced legislation creating the Freedmen Bureau, the Civil Rights Act and the 13th Amendment, abolishing slavery. He was known as the “magnificent hairsplitter.”

Hecker was one of the prominent “48ers,” revolutionaries of 1848 who fled to the U S after a failed coup in Germany. He was recognized in his homeland as a champion of human rights and virulently anti-clerical. Hecker purchased a farm near Lebanon and became active in Democrat, and later, Republican politics. Lincoln asked Koerner to have Hecker speak at a German gathering to support his 1858 Senate campaign against Stephen Douglas. Koerner urged caution in employing Hecker’s fiery oratory skills, adding, “while well calculated to animate friends, he cannot conciliate opponents, and amongst Catholics and even orthodox Protestants he is considered as the very Anti-Christ.” Germans memorialized Hecker with monuments in parks at St. Louis and Cincinnati.

Bissell joined James Shields in a Belleville law practice in the 1840’s. He served in the Mexican War at Buena Vista and when Jefferson Davis, later the president of the Confederacy, made critical remarks of Illinois soldiers service that day, Bissell defended his men, which prompted Davis to issue a challenge to duel. Davis’ father in law, President Zachary Taylor, who was Bissell’s commander at Buena Vista, had Davis arrested to stop the duel.

As Lt. Governor in 1853, Koerner was in line to become Governor. Know Nothings in the Illinois legislature would not support Koerner, and Bissell was chosen as the candidate. Lincoln visited Belleville in October 1856 to support John Fremont for president and Bissell for Governor of Illinois. Bissell was the first Republican elected Governor.

As a member of the statewide Democrat ticket, Koerner supported Douglas prior to introduction of the Kansas Nebraska Act which would have allowed expansion of slavery to western states. Koerner thought Douglas’ introduction of the Act was aimed at gaining southern votes in a later bid for president.

Koerner worked tirelessly for Lincoln in the 1858 Senate race against Douglas, sitting with Lincoln on the platform at the last debate in Alton. Koerner and Douglas reconciled by the time of Lincoln’s presidential inauguration, noting in his Memoirs, he lent Douglas a shawl on the chilly morning of the swearing-in.

Koerner and other Lincoln supporters fought to get Chicago as the site of the Republican convention for the 1860 presidential race. Lincoln’s supporters negotiated with state delegates to wrest the nomination from the pre-convention favorite candidate, William Seward.

Admission tickets to the Wigwam, the convention hall, were distributed to Lincoln backers to make it appear he had more support than Seward and other candidates. As the negotiating became intense, several on Lincoln’s team sent telegrams urging him to stay away. Koerner’s telegram read, “Don’t come here.” When the nomination was secured, Koerner traveled to Springfield to help deliver the joyful news and assist Mary Lincoln in preparing a reception

Koerner was the only southern Illinois leader to serve as a pallbearer at Lincoln’s funeral. Koerner’s importance as a key supporter in the German community, Lincoln’s appointment of Koerner as Minister to Spain in 1862 and his early friendship with Mary Todd in Louisville placed him among Lincoln’s closest advisers.

Unless otherwise stated, all photograph images on this Web page were used with permission of Lincoln Net
http://lincoln.lib.niu.edu
Northern Illinois University Libraries.

N Y Times May 14, 1910. Saturday Review of Books, “Civil War and Earlier- A German American Who Saw Napoleon (but forgot it) and Knew Lincoln and Grant”