“Missouri, dear Sir, must be sustained. Pour troops into it. The noble Union men there must be protected[.] our Illinois troops are panting to cross over to help keep the peace. No Union man must be left to suffer henceforth.” – Gustave Koerner to Lincoln, May 17, 1861. View this and other documents from our Lincoln Connections Web page.

About Koerner | Koerner’s Youth | Emigration | Travel in U.S. | Politics and Lincoln | Civil War | Spain | Publications By or About | Family
Encountered in organizing its defense: “Without occupying our standpoint you can not conceive how this subject embarrasses us. We have promises out to more than 400 regiments, which, if they all come, are more than we want. If they all come, we can not take yours; if they do not all come, we shall want yours. And yet we have no possible means of knowing whether they will come or not.  I hope you will make due allowance for the embarrassment produced.” 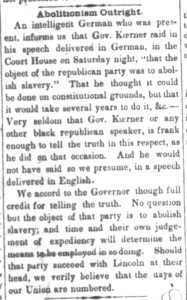 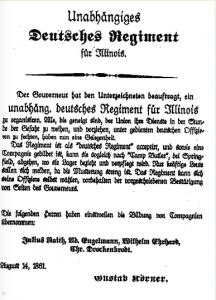 ****************************************************
For a discussion of the German soldiers who dealt with nativist feelings during the Civil War, including the 43rd Illinois Infantry and two other units, click this link to the masters theses of John Sarvela, Soldaten Des Westens  An Analysis of the Wartime Experiences of Three German American Regiments from the St. Louis-Belleville Region, University of Southern Mississippi, Aquila, Spring, 2019 https://aquila.usm.edu/cgi/viewcontent.cgi?article=1680&context=masters_theses

Gustave Koerner attended President Lincoln’s inauguration and wrote to his wife Sophie,” Lincoln is president. In the presence of at least 10,000 people he took the oath and read with a firm voice his inaugural. I stood close to his chair; next to me stood Douglas ,while the weather was fine, it was nevertheless quite cold on that platform. Douglas had no overcoat and I saw he was shivering. I had not only a big overcoat on but also a thick traveling shawl, which I flung over him to make him comfortable.”
A few weeks later, when the crowd which had assembled at the Belleville Public Square heard the telegram read announcing the firing on Fort Sumter, South Carolina, in April 1861, Koerner exclaimed, “ this is the last day of slavery.” In contrast, former Governor John Reynolds, a longtime Belleville resident, slave owner and southern sumpathizer, said, “the revolution in the south is the greatest demonstration of human greatness and grandeur that was ever performed on the globe.”
Belleville men responded to Lincoln’s call to arms by joining companies of the 9th Illinois infantry, the22nd infantry, Missouri 12th and Koerner’s 43rdinfantry. Koerner was called to Springfield at the start of the war to help Governor Richard Yates. As Yates assistant, Koerner was introduced to Ulysses Grant, who came to Springfield as a seasoned veteran of the Mexican war. Koerner suggested Grant be given a role in reviewing recruitment activities around the state. Koerner wrote “I must confess that Grant at that time did not look very prepossessing. Hardly of medium height, broad shouldered and rather short-necked, his features did not indicate any very high grade of intellectuality. He was very indifferently dressed, and did not at all look like a military man.” Governor Yates offered Grant the position of assistant quarter master and one month later Grant was in charge of a unit.
Koerner had written to Lincoln offering to raise two regiments of German soldiers. The uncertainty about the number of men needed at the beginning of the war was made clear in Lincoln’s letter of August 8, 1861, to Koerner :“Without occupying our standpoint you cannot conceive how this subject embarrasses us. We have promises out to more than 400 regiments, which, if they all come, are more than we want. If they all come, we cannot take yours; if they do not all come, we shall want yours. And yet, we have no possible means of knowing whether they will all come or not. I hope you will make due allowances for the embarrassment thus produced.”
Shortly after that, the 43rd was formed with approval from Governor Yates and made up of German immigrants from Belleville, Mascoutah, Shiloh, Lebanon and other areas of southwest Illinois and central Illinois.
Koerner was critical of Grant’s leadership at the battle of Belmont, Missouri, where the 22nd Illinois Infantry Regiment, made up of Belleville men, suffered casualties. “As foolishly conceived as it was miserable conducted. It was utterly without object and undertaken by Grant without orders from the commander of the department. In any other country Grant would have been removed from his position at once,” Koerner wrote.
Koerner also noted the loss of life in his 43rd Illinois Infantry Regiment, at the battle of Shiloh. “Confederates, 45,000 men, surprised our army of equal strength , drove us from our position some 2 and a half miles west of the landing to very near the river. Next day, battle renewed. Severe fighting for 36 hours and passing of the night in a cold and heavy shower had told terribly on our men. Koerner regiment suffered severely. It went into battle with about 525 men only, and its loss amounted to 197 men. Five officers were killed and wounded. “
After Shiloh, the 43rd Illinois, under Colonel Adolph Engelmann, brother of Koerner’s wife Sophie, checked the advance of confederate General Nathan Bedford Forest near Jackson, Tennessee, and after other maneuvers spent the remainder of their term capturing and then garrisoning Little Rock, Arkansas. They were mustered out of service November 20, 1865 at Springfield, Illinois.
Lincoln appointed Koerner Minister to Spain in November of 1862. He returned to Belleville in July,1864. Koerner visited Lincoln in Washington in November, 1864. “When I last saw him, he was in the best of spirits. He saw “daylight” he said, told more amusing anecdotes than he had ever done before when I was with him, alluded however in feeling some of the gloomy and harassing periods he had passed through and which had almost broken his heart,” Koerner wrote in his memoirs.
Lincoln’s death was “ a national calamity” ,according to Koerner’s memoirs. Koerner served as a pallbearer at the funeral. The other pallbearers were political associates from Lincoln’s Whig party times, when, according to Koerner’s memoirs, “I was of course in decided opposition as a Democrat to Mr .Lincoln and his principles. Our personal relations during that time of political difference had been very friendly, however, and for some reason or other Lincoln had treated me with particular kindness and attention. I knew him well enough to have been able to detect certain weaknesses and defects in his character. The great and good however, largely preponderated. Mr. Seward said of Mr. Lincoln that he was the best man he ever knew. I should rather say he was the justest man I ever knew.”
.

James Shields was an important influence in Gustave Koerner’s life, both politically and as a personal relationship. GENERAL JAMES SHIELDS…WARRIOR, JURIST AND STATESMAN
By Jack Le Chien

Gustave Koerner crossed paths with many interesting people from 1833 to 1896 when he worked and lived in Belleville. One of the most dynamic characters Koerner knew was General James Shields.
Shields, born in 1806, emigrated to the U S in 1826 from Altmore, County Tyrone, Ireland, after receiving a private school education emphasizing classical studies. He taught school at Kaskaskia, Illinois and studied law, passing the bar in 1832. Adam Snyder, Democrat Congressman, was Koerner’s law partner. Shields and Snyder became acquainted and Snyder suggested Koerner and Shields form a partnership as Snyder was ready to retire. Koerner and Shields were both elected to the Illinois House of Representatives in the late 1830’s while practicing law in a two room building in the northwest corner of the Belleville public square. 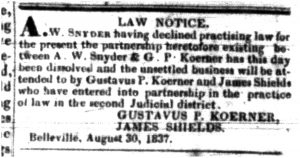 Library of Congressphoto of general shields
Civil War General James Shields, Shenandoah Valley, Virginia.
Shields moved to Minnesota and became involved in land speculation. He targeted immigrant Irishmen to establish a community near Faribault, Minnesota, and by 1856 a community of 1,500 had sprouted and was named Shieldsville. The boom ended because of continuing problems with nearby Indian tribes and economic conditions. Shields again ventured into politics and was elected to the U S Senate from that state, serving in 1858 and 59. After serving his term he sought better health and financial opportunities in California. Shields married Mary Ann Carr, who was 30 years younger than he, on August 15, 1861. (11)

The Civil War arrived and Shields sought an appointment. He was commissioned Brigadier General of Union Volunteers in 1861. The experienced fighter was assigned to the Shenandoah Valley of Virginia and on March 23, 1862, he engaged Confederate General Thomas Stonewall Jackson at the battle of Kernstown, near Winchester. During the battle, Shields arm was broken by a shell fragment and he was knocked from his horse. He directed the remainder of the fighting from a cot and forced Jackson’s forces from the field. His victory over Jackson gave Shields the distinction of being the only Union general to defeat Stonewall Jackson. (12)

Minnesota Senator James Shields
Shields, suffering pulmonary distress from his lung injury and pain from other war wounds, returned to California, but before long he was off to Missouri where he settled at Carrollton, practicing law and resuming his political activities. He was elected a state representative in 1874 and 79 and then served a term as railroad commissioner. When the sitting U S Senator died in office, Shields was chosen to replace him, making Missouri the third state he represented in the U S Senate. He is the only person to have represented three states in the U S Senate.shields minnesota capitol
Shields spent his last years at his home at Ottumwa, Wapello County, Iowa. He died June 1, 1879.
Koerner said of Shields:” He was exceedingly vain and very ambitious. But he was not given to intrigues, was careless about money, and in spite of his many opportunities to enrich himself, never accumulated property.”(13)
But Koerner respected the power of personality as he expressed these final thoughts on his friend’s life and career. “I believe he held more offices than any man in the United States. His most extraordinary career was a mystery to many. He really did not seek popularity, but yet had a sort of winning way about him that make him friends quite readily…I knew all of his weaknesses, and his vanity amused me. When asked why I liked him and fought for him so much, I really had no particular answer to make. It was his enthusiasm I believe; even his impulsiveness.” (14)

Statue of General James Shields in the Hall of Columns, U S Capitol, Washington, D C. It was donated by the state of Illinois in 1893. 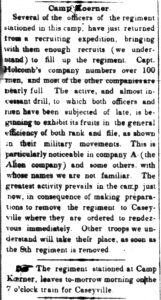 Camp Bissell,named after Republican governor William Bissell of Belleville, was located at the fairgrounds on the south of Belleville. The name was later changed to Camp Koerner and Camp McLellan at Caseyville was changed to Camp Bissell. The excitement and confusion of organizing a war effort was last experienced in 1847 at the time of the Mexican War. Soldiers were organized at Camp Koerner and later transferred to Camp Defiance at Cairo.