“Do right and fear no one.” – Gustave Koerner

The restoration of Belleville’s historic Gustave Koerner home, on Mascoutah Avenue at Abend Street, will stand as a testament to one of Belleville’s most illustrious citizens. Koerner joined Abraham Lincoln, Horace Greeley and others who, fired by the passions of the times, came together to create the Republican Party in 1856. Koerner became a close Lincoln confidant, helped write the 1860 Republican Party platform, and helped manage Lincoln’s drive to the presidential nomination at the party’s convention. Koerner was an ardent anti-slavery proponent and, as a German emigre, played a key role in allying western America’s German population with the Union cause.

The Koerner House Restoration Committee, working with a team of consultants, has prepared a Historic Structure Report. Selective demolition of the structure’s modern components commenced in May 2005. Once complete, the home will be opened as a museum, where Koerner’s life and political career will be interpreted.

All photographs courtesy of Fever River Research
Please do not duplicate without permission.

Bird’s Eye View of the Gustave Koerner Home (Ruger 1867) prior to addition of the large bay window on the rear service wing. 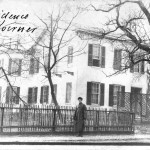 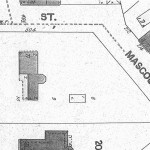 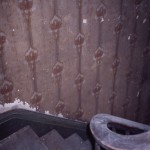