Following are accounts about life on the Engelmann farm, Shiloh, Illinois, beginning in 1833.
The letter is dated March 17, 1834, from New Germany-Engelmann farm, about ten months after they arrived at Shiloh Valley.

The sisters take turns writing to Gretchen, their sister who remained in Germany, describing the farm work they do.
The work out of doors in the open we find pretty heavy but the air is so soft and pleasant and lasting and when we gradually see the results of the work of our hands we get a great deal of pleasure from it. Le me tell you what our dear ones are doing today-our dear mother – as you see- she wanted to write to you but her hand trembled so from her work- so she is washing the fine clothes; Lottchen (a sister) is cooking; Sophie, Betty and Marianne (also sisters) are at present digging in the garden; Theodore and Johann (brothers) are making fence. So frequently Theodore with his horses drives by my window and gets rails that they split last week. It is the hardest work that the American farmer knows- they split pieces six to ten feet long and three to six inches thick out of large logs. While the young men had very sore hands still they had made about 1,000 pieces. While Koerner is teaching the two children- George is busy helping with the fence. Father (Frederick) who has not been quite well the past eight days is repairing and improving various tools, impliments and furniture, otherwise he is cutting trees, making plow and harrow, sleigh and yoke, and now is making a marker to lay off the rows for panting corn. He is a pattern of industry-only I sit here alone and write to you as mother will not let me work out of doors today, as I have not been quite well for several days- tho it does not amount to much, however I will help with the washing tomorrow. Diahrrea is a very common complaint here and at present Father, Theodore and I are suffering in various degrees….
If a block slides out of the wall into the yard it is just a stupid mistake of the builder-even tho the thermometer stands at twenty one degrees cold. In the warm season these little houses are all the better. We had four weeks of winter with some right fine cold clear days with deep snow and fine sleighing. On the 28 of December it was so warm we did not need a fire- and all of February was equally fine, with a clear sky and balmy air. March also, up to now has been pleasant and all the past week we have been digging in the garden and will get through today. We have sowed various things and one of these days will plant potatoes. We have some apple trees that will be in full bloom in eight days at the latest. Fruit tree seeds we have set out in abundance and last week Father visited the Hilgards (cousins who lived about two miles away) Edward and Theodore , the latter had another attack of fever. Edward gave him some buds for grafting; quince, pear and apple which was a real worth while present for without apples no orchard here is recognized as such.
Koerner has received an offer from a St. Louis publishing house to write a German column for an English paper (St. Louis Times.) He went to see about it- and while he did not take up their offer he made the man a proposition to write a complete German paper- very likely this will come to pass under good terms for Koerner. It will be decided in several weeks. The Americans have great respect for his knowledge and ability. The are also beginning to put much trust in the German doctors.
Just now everyone is very much taken up with the election of governor, there are three candidates. This morning Koerner was at the home of the one who will very likely be elected to buy a bushel of early potatoes. He lives four miles from us and is an industrious farmer, while he is rich he is reported to be very democratically minded. He is Master William Kinney.

INTRODUCTION
Robert deV. Brunkow
On 27 August 2007 the St. Clair County Board approved purchase of Engelmann Farm in Shiloh, Illinois, for a county park. This volume of the Journal of St. Clair County History is dedicated to the history of Engelmann Farm in recognition of the county’s decision. The farm is both a historical site and the location of a pristine woodland. The articles in this issue review the historical significance of the farm and provide a window into daily life on a late 19th-century farm of a prominent German immigrant family.
Political émigré Friedrich Theodor Engelmann (1779-1854) and his wife, Elizabeth Kipp Engelmann (1781-1861), immigrated to the United States in 1833 and purchased the farm in August of that year. In December 1833 their second oldest child, Charlotte (later Charlotte Ledergerber, 1805-1856), expressed the aspirations of the Engelmanns and the party of educated German idealists who came with them to Shiloh Valley Township. In exchange for the liberty that they had lacked in the Old World, she said they would employ the “art, science, and culture” they brought with them to develop the New World. She hoped that “our new country and our new Germany, as we call the region we inhabit now,… will grow in time as it takes in all those who sacrificed their security for the liberty of the country across the seas where liberty was born—those who were fortunate enough to escape from the Argus of prison and serfdom.” The first residents of Engelmann Farm referred to it as the “Refuge of Righteousness on the Mississippi (Herberge der Gerechtigkeit am Mississippi).” Here political exiles found a safe harbor in the 1830’s, and other immigrants found temporary quarters before moving on to permanent homes. As Charlotte had hoped, those associated with the farm and the immigrant community that developed around it in Shiloh Valley made contributions to the science, culture, and politics of their adopted home.
The immigrants who like the Engelmanns remained on their farms contributed to the economic development of the region. Their accomplishments rested on hard work. The Engelmann Farm that Friedrich and Elizabeth’s granddaughter, Anna Engelmann (1869-1960), described in recollections printed in this volume was an orderly series of gardens, fields, vineyards, and orchards in the 1870’s and 80’s. That is not the farm that the first generation found when they arrived on the land in 1833. Gustavus Koerner acknowledged that the farm then had a solid cabin and excellent peach orchard but found neglected fields, broken fences, dilapidated outbuildings, and failed wells. It was primarily the energy of Friedrich Engelmann that renewed farm productivity. His youngest daughter, Elizabeth (later Elizabeth Scheel, 1819-1883), late in the winter of 1834 enumerated his current projects: cutting wood and repairing and fabricating furniture and implements, including plow and harrow, sleigh and yoke, and a marker to lay off the rows for planting corn. Theodor (1808-1889), the oldest son, with grim humor reflected on the hardships of the early years. “It was with father a firm principle … that work was so much more deserving the greater the difficulties under which it was done and the poorer and more unsuitable the work tools were with which one did the work. His teaching was acquired through the circumstances, through bitter necessity….”
The first article in this journal documents the issues Charlotte raised. Written to explain the need to preserve the property from development when the farm’s future was uncertain, it summarizes the history and significance of Engelmann Farm, identifying people associated with the farm and their roles in the development of the county and the country. 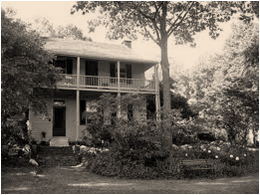 Part of the significance of the farm rests on the historic buildings on the property. The second article describes the two 19th-century homes on the farm.
Since much of the journal publishes recollections of Anna Engelmann, the third essay sketches her life. She was the last of the Engelmanns to own the farm. Her recollections—published here for the first time—provide in the three articles that follow a richly detailed account of daily life after the Civil War. She describes the farm layout and agricultural practices and even identifies the flowers in the garden. She delineates the network of friends and relations the Engelmanns established. The importance of the extended family is evident in her writings, and the reader learns from her of the role of family in caring for orphans. What the family ate, read, and celebrated is described in Anna’s writings. The Engelmann children were home schooled as well as attended public school, and Anna documents their education. Far from being an isolated, self-sufficient economic unit, Engelmann Farm was economically, politically, and culturally integrated into Shiloh, Belleville, and St. Clair County affairs.
Alice Lienesch, who was born on the farm, wrote the final article in this journal. She knew Anna Engelmann and recollects life on the farm in the 1930’s and 40’s.
Preservation of Engelmann Farm provides us with an opportunity to reflect on the sacrifice, the ability, and the ideals of those who came before us. A walk through the woods the Engelmanns knew and past the buildings they erected may lead us to ask the question, “Do we measure up?” And, perhaps, it may inspire us to greater endeavor.

About the Author
Robert deV. Brunkow holds a Ph.D. in history from the University of California, Santa Barbara. For 20 years he was a civil service historian for the U.S. Air Force. He was involved in the effort to preserve Engelmann Farm. He resides in Belleville, Illinois.